How Should We Interpret the Bible?

For all Bible interpretation, the real question should not be, "could this mean something else if I look hard enough?".  The question should be: "What is the most likely meaning of this verse as it would have been understood by the common man of that time period?"

Why is this the correct question? Because God has inspired the Bible for us to read, understand, and to apply.  If it can only be understood by experts, then God probably should have worded it better, which would imply God is not perfect.  See my point?

A short quote from wikipedia: "Sola scriptura (Latin: by Scripture alone) is a Christian theological doctrine which holds that the Christian Scriptures are the supreme authority in all matters of doctrine and practice."


Here are my general principles for Bible Interpretation:

1) Scripture should be used to interpret scripture.

2) Unclear or ambiguous versed should always be interpreting in the light of more clear verses.

4) Greater cultural understanding of the people and time period of a verse should deepen and expand the meaning of a verse. It should never reveal a new meaning that contradicts the previous straightforward reading. Why you ask? This technique could create a slippery slope that can be used to reject any passage to suit the desires of the reader.

5) We must be consistent to interpret all passages with the above mentioned principles. If we accept some verses as straightforward, but bend over backwards to get the meaning we want in another area, then we lessen the value and weight of all passages and give others the free pass they are looking for to bend over backward when they interpret areas that you consider straight forward.  A dangerous precedent is created.

Other good articles that talk about the proper interpretation of scripture:

Is there a Reformed approach to science and Scripture review - creation.com
http://creation.com/is-there-a-reformed-approach-to-science-and-scripture-review

Is there a universal way Christians should interpret the Bible? - creation.com
http://creation.com/is-there-a-universal-way-christians-should-interpret-the-bible

Does Modern Man Have a Problem with Idol Worship? 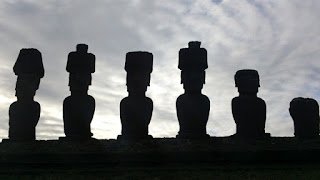 When we hear the word idol or idol worship we tend to imagine some distant remote island, isolated from the world or some primitive culture from the year 653 BC.  Natives dressed in coverings made from plants are bowing down to some statue while chanting. While this type of scenario would qualify as idol worship, it is far from the only thing that qualifies.  In the year 2016, in first world countries, this type of idol worship is becoming more rare.  Defining idol worship narrowly like this misses the point of this commandment.

The next verse does go on to talk about not making images (statues) to worship instead of God. Verse 4 and verse 3 do overlap, but I don't think they are identical. We can treat anything in our lives like a god and if we put that thing before the one true God then we are partaking in idol worship.

A better way to define idol worship for the modern man would be to say: If we allow anything in our lives to displace God, then we are committing idol worship.  In other words, if anyone who claims to follow God/Jesus puts something in the place (highest priority) that God rightfully deserves, then you have displaced God by something that you could accurate describe as an idol.

We are all sinners and most of us are guilty of this sin for a period of time.  Our goal should be to commit ourselves to avoiding this situation daily. Only by keeping God is the forefront or our mind, by mediating on his word daily, can we hope to avoid this common pitfall.
Posted by Paul at 6:09 PM No comments:

Can We Trust Science?

I would like to start off by saying that I like science!  I am an analytical, data driven type of person.  I work on computers a lot and I appreciate all the scientific advancements that mankind has made.  Science has produced some really cool technology and other human advancements.  However, we enjoy the benefits of science so much that sometimes we forget to ask the important questions.
Can we trust Science?  Our culture answers this question with a resounding YES!  We worship all things science.  If a scientific study says something is true, then don't ask questions just believe it!  If you try to challenge the conclusions of science you are insulted and called names.  This position that science has in our culture creates some questions. Do we understand the consequences of worshiping science?

Is it healthy to worship science?
It is said that a strength of science is that it is "self correcting", meaning eventually the correct conclusion is reached.  However, I see this as a reason for caution.  If science is constantly correcting (a.k.a changing), we cannot tell if we are at the final correct conclusion or just a intermediate conclusion, then how can we so boldly follow and repeat the most recent scientific conclusion!?
If a nobody like me is aware of our culture's obsession with anything that has the approval stamp of "science", then a lot of much more powerful, dishonest people are aware of this too.  They can easily manipulate huge masses of people by influencing the conclusions of a scientific study, project, or research.  The stamp of "science" is becoming a weapon wielded by all the parties fighting for a foothold in the battle for your mind.
Part of the reason that our culture puts so much weight on "science" is because they perceive science to be objective, neutral, and less prone to corruption.  However, as I learn more about our world and human thought processes, I think that these perceived qualities of science are very questionable.  Science in its purest, theoretical form, does appear to have these qualities, but in reality our form of science is far from the theoretical and often very distant from its purest form.  A neutral scientist is getting harder and harder to find.

Conclusion
Science is not useless.  Science is great and has contributed greatly to society.  However, science should not be blindly trusted and new information always requires some vetting and a healthy dose of skepticism.  Science is really about man observing creation, learning about how it works, and finding new ways of arranging it so that it benefits man more.  God is the creator of all things and without him science would have nothing for it to study or rearrange.


Wikipedia has a page on scientific misconduct. one person was accused of publishing 90 fraudulent research papers.

The See also section of the above Wikipedia article lists these additional topics:

The Limits of Science | Answers in Genesis
https://answersingenesis.org/what-is-science/the-limits-of-science/
Posted by Paul at 12:03 AM No comments:

This is a great sermon about picking your friends and being careful about who you spend time with.